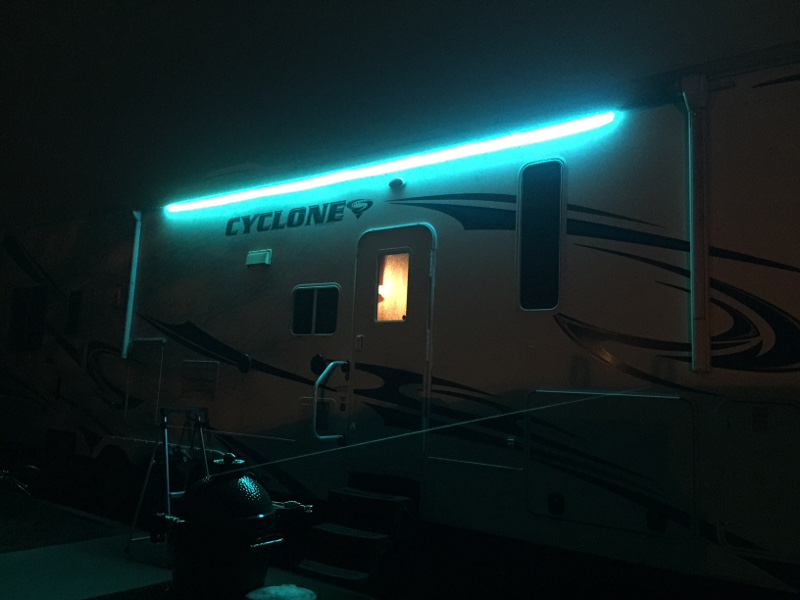 I replaced a recently failed RGB LED strip light controller in my RV with a homebrewed version using an Arduino Yún. The result is wifi-controlled, schedulable exterior lighting that is far superior to the overpriced, failed piece of junk!

I own a large fifth wheel RV that, until recently, lacked good porch lighting. While browsing the aisles at a Camping World store, I found a 16’ 12VDC RGB LED strip and RF remote boasting wireless control out to 40’ without the need for IR line-of-sight like most similar models. Instant gratitude dictated that I bite the pricetag bullet. Two weeks later, the controller bit the dust.

During the two weeks of stock operation, I traveled several hundred miles from the nearest Camping World. I installed the LED strip very permanently with 3M extreme duty mounting tape, and I sealed the controller wire pigtail into the side of the RV with some (lots of) stout marine grade sealant. A warranty return was likely impossible.

You’ll also need a computer with an up-to-date Aruino IDE installation (1.5.4 or later).

Lesson #2: The parts for this project will cost almost as much as the original, overpriced strip (around $100).

The cost was worth it to me as an academic venture to try out the Arduino Yún, but there are certainly cheaper solutions. For example, the combination of a Teensy microcontroller, WIZ820io ethernet module, and cheap TP-Link wireless router would virtually cut the hardware cost in half. Choose pushbutton control rather than wireless, and the parts bill could be quite cheap. Also, off-the-shelf IR remote LED controllers cost around $20.

Due to a stroke of luck, the LED strip terminates exactly behind my RV’s bathroom medicine cabinet, making it very easy to hide the (pressently ugly) installation.

My RGB LED strip is configured with a common anode, meaning that each color is constantly connected to +12VDC, and each color’s ground is separately switched in order to control the perceived color. A common cathode strip could be substituted, but I will cover only the common anode configuration.

IMPORTANT: To determine the appropriate transistor base resistor value, download the datasheet for your transistors and then use a calculator like this one, or you can try your hand at some math. Ohm’s law will help to determine current and/or resistance values for the circuit load. My LED strip draws about 1A per channel at full intensity.

Lesson #3: Arbitrarily selecting a base resistor value that is too high (like 1kΩ, in my case) will not saturate the transistors, thus forcing them to act as current limiters and dissipate power as heat. Ask me how I know…and note in the heat sinks I installed as a stop-gap measure before realizing my mistake and reducing the value to a more appropriate 100Ω. Be careful not to select too low a resistance, which may demand too much current from the Arduino pins, resulting in unstable or damaging behavior.

Before applying power, double check that +12VDC will not be directly supplied to any portion of the Arduino board. When you’re ready to power the system, connect the Yún to the phone charger.

All of my source code is available on GitHub. The included README contains most of what you’ll need to know. Here is a brief overview.

Credit where it’s due - Matteo Loglio’s GitHub repo provided the initial code-base for this project. I deviated signifcantly from his design, but the basic concept translated well.

I encourage you to download and install the latest OpenWrt-Yun image before doing any significant sketch development. Then follow the Getting Started Guide to get familiar with the Yún and its architecture. Also, take a look at the YunSerialTerminal and Bridge example sketches.

Simple directions for sketch upload (Linux) and use:

Example REST calls:
(you can bypass the web UI and directly access the sketch at its basic level)

The web UI includes some minor optimization for mobile devices, since I intend to use my iPhone as the primary remote control. It looks nice on the roomy screen of an iPhone 6+ but may fall short on smaller displays.

Here are some screen grabs. Note that my Yún is configured with a custom hostname (cycloneled).

Tidy up the installation with a soldered (custom printed?) board and enclosure.

Determine idle and active power requirements. I don’t know what drain/demand the system will place on my RV’s batteries when disconnected from shore power. I’m guessing that the current draw (even when the lights are off) is somewhat significant, and the controller will likely need to be powered down if the RV is operating on battery power for long periods of time. There may be some sleep/low power APIs available to help curb power idle consumption, but I haven’t implemented any yet.

Code a more elegant schedule implementation. At present, raw, ugly atq output is sent to the client webpage when the schedule is requested. Also, the user cannot selectively remove scheduled state changes - the entire schedule is deleted with the “Clear Schedule” button. Both of these behaviors could be improved by storing the schedule in a local (SD card) text file.